There are seven species and varieties of Coralroots that grow in our area and one that was thought to be indigenous (unique) to Western Washington, the Ozette Coralroot, but has proved to be more widespread, though still rare.  Two of the others are quite rare.

Coralroots are named for their large coral-like rhizomes, undergrounds "stems" that produce both roots and shoots.  The Coralroots all live off fungi in the soil (they are mycotrophic), produce little or no chlorophyll, and are leafless.

The Spotted Coralroot is the most common of all the species in North America, though one other species, the Early Coralroot, is found also in Europe and is very common there.  In its two varieties, the Spotted Coralroot is found in Alaska, across Canada from British Columbia to Newfoundland, and across most of the United States with exception of Kansas, Oklahoma, Missouri, Arkansas, Louisiana, Alabama, Mississippi, and Florida.

There are two very similar varieties of this orchid distinguished only by the shape of the lip and the flowering time, though they often grow together in the same areas.  Both varieties have  at least several different color forms, some of which are quite rare.  These two varieties both varieties grow to about 50 cm tall and both have numerous flowers, as many as thirty on a spike.  The flowers, however, are quite small, 5-8 millimeters each.

The later flowering and more common variety is Corallorhiza maculata var. maculata.  It is easily distinguished by the side lobes of the lip which are parallel and by the shape of the flowers which are more cupped than the other variety.  The stem color and flower color vary from tan to red in both varieties, though with var. maculata the color red is more common in our experience. 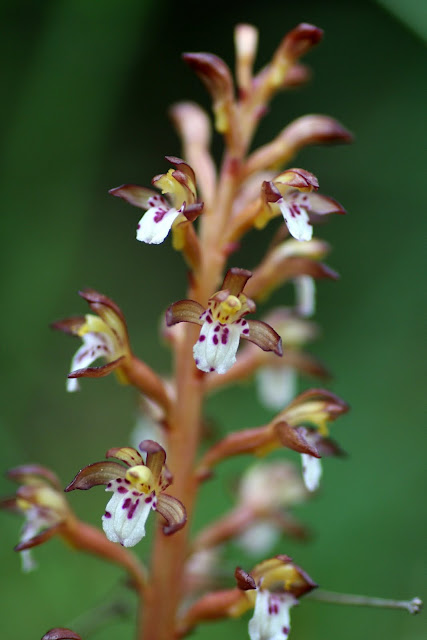 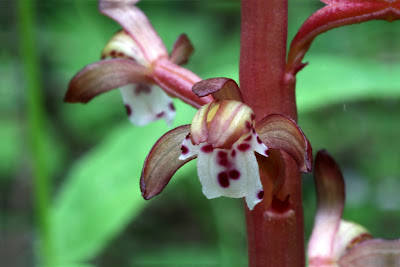 The other variety, Corallorhiza maculata var. occidentalis, the Western Spotted Coralroot, is really misnamed, since it ranges as far as eastern Canada and the eastern United States and as far south as Virginia.  It is distinguished by a lip with a wider, almost circular, mid-lobe and more open flowers than the first and more common variety. 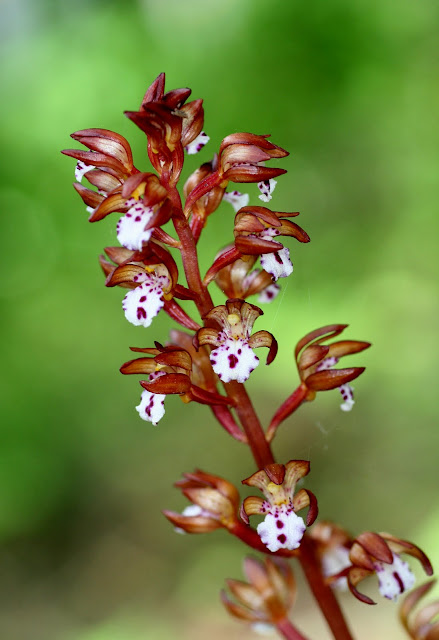 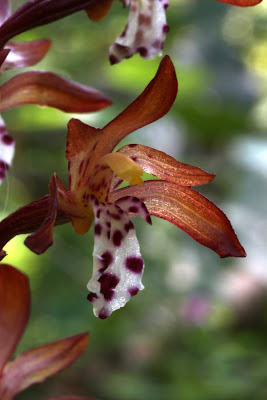 There is also a third variety of Corallorhiza maculata, variety ozettensis, but this variety is so unusual and so rare that I'll post it as a separate article.
Posted by Ron at 10:48 AM