Neottia cordata in the Columbia Gorge 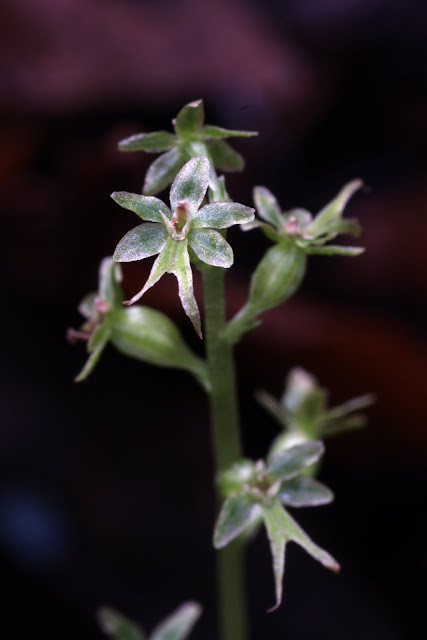 Neottia cordata, the Heart-leaved Twayblade, is a small, hardly noticeable species of our native orchids.  We found it hiking in the Columbia Gorge on May 17th, but found it almost accidentally.  We had seen Fairy Slippers (Calypso bulbosa) in various locations along the trail and had stopped in one particularly good location to photograph them when we noticed, while crawling around on the ground, that there were Listeras growing in the same location.
Later as we hiked back down the same trail we saw them everywhere, including the red variety, though we had not seen them going up the trail.  We are always watching the plants along the trail, so they must be diminutive indeed for us to have missed them.  I've described them more fully in another post on this blog: http://nativeorchidsofthepacificnorthwest.blogspot.com/2010/11/heart-leaved-twayblade-listera-cordata.html, so will not describe them in detail again here. 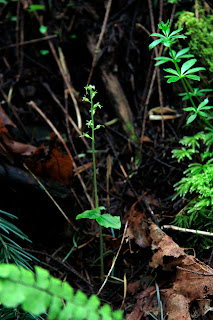 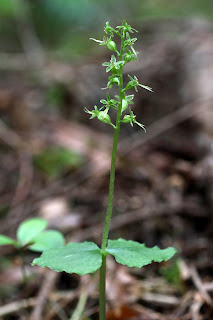 The plants we saw were all less than six inches tall and that along with their location leads me to believe that they were variety nephrophylla, the Western Heart-leaved Twayblade, the reddish form being variety nephrophylla fma. rubescens.  They seemed to grow for the most part as individual plants and not clumps, though always in damper, shadier locations.  Interestingly, the red form (shown below) was nearly finished flowering, while the green form was at its peak in most cases. 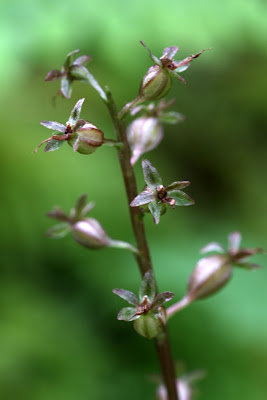 Corallorhiza striata in the Chuckanuts 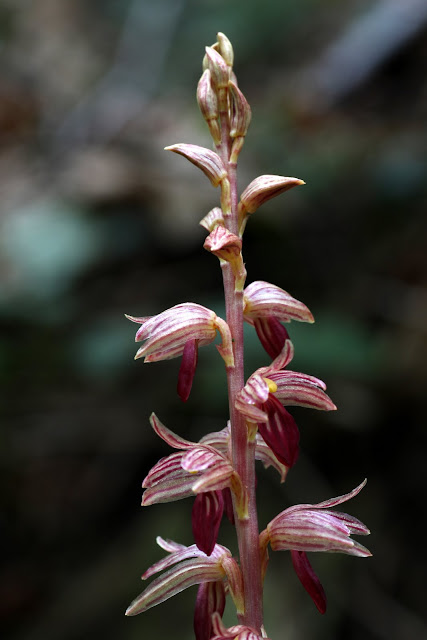 There is a detailed description of this leafless, saprophytic species already on this blog and the photos there came from the same location as the photos here, but I'm posting this with emphasis on habitat and location: http://nativeorchidsofthepacificnorthwest.blogspot.com/2010/08/striped-coralroot-corallorhiza-striata.html.

As the Coralroots go this is one of the smaller species, but also one of the largest flowered species.  The plant is only about a foot tall in this location but the flowers are three quarters of an inch in size and very beautifully colored.  This is definitely a species worth looking for and one that will be remembered when found. 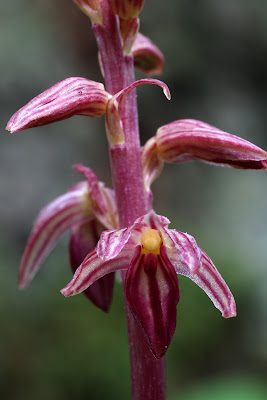 There are a number of these growing on the edge of the Interurban Trail in the Chuckanuts, south of Bellingham.  The trail is heavily used by bikers, walkers and runners, but the plants are far enough off the path itself that they generally escape damage, though I noticed when I was first there that one spike was broken off. 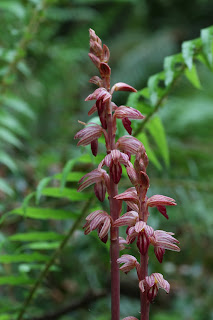 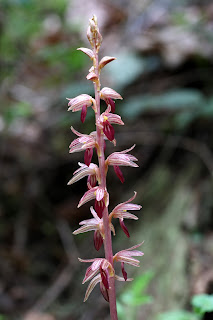 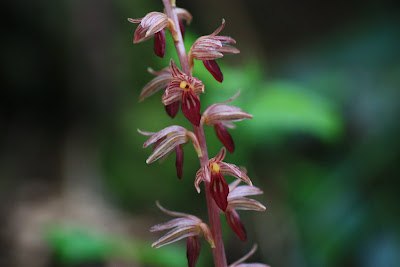 I counted about a dozen single spikes scattered along the trail, most of them half hidden in the surrounding growth and one larger clump of six spikes in a more open and slightly wetter area.  There were more spikes last year, but Coralroots are notorious for their unpredictability and I may also have missed some. 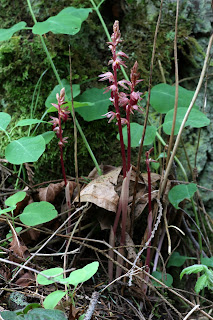 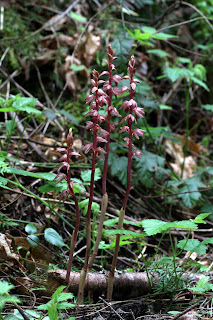 These were found and the location passed on to me by my good friend, Marti Anderson whose blog is well worth following: http://meanderingwa.blogspot.com/2010/05/larrabee-state-park.html.  I've been to see them twice this spring, but found only just beginning to open the first time.
Posted by Ron at 1:55 PM No comments: 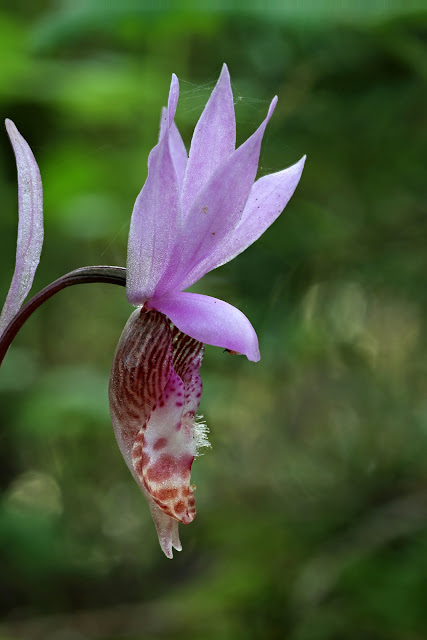 I've posted a fairly detailed description of this species and its varieties previously: http://nativeorchidsofthepacificnorthwest.blogspot.com/2010/07/calypso-bulbosa.html.  I'd promised myself, however, that this year I would concentrate on getting pictures not only of the native orchids themselves, but of their habitats and here's the first post by way of keeping that resolve.

Calypso bulbosa, the Fairy Slipper, is the first of our native orchids to bloom, and if one looks in the right places it can be found in abundance.  This year I've been to Washington Park on Fidalgo Island, west of the town of Anacortes, Washington, three times to see it, though the first time I went I was a bit early and found only a single flower in bloom.

This is the variety found only west of the of the Rockies and in the North Cascades, C. bulbosa var. occidentalis, the Western Fairy Slipper.  It is easily distinguished from the eastern variety, also found here in Washington, by the white rather than yellow beard and by the brown spotting on the lip.  These differences can be seen in my previous post.

Some different views of the flowers first.  The whitish flower is either not fully open or is well past its prime, probably the latter, since most of those that I saw this color were closing and setting seed.  I keep hoping to find the very rare white (alba) form of the species, which has none of the purple or brown color at all, but all I find are these. 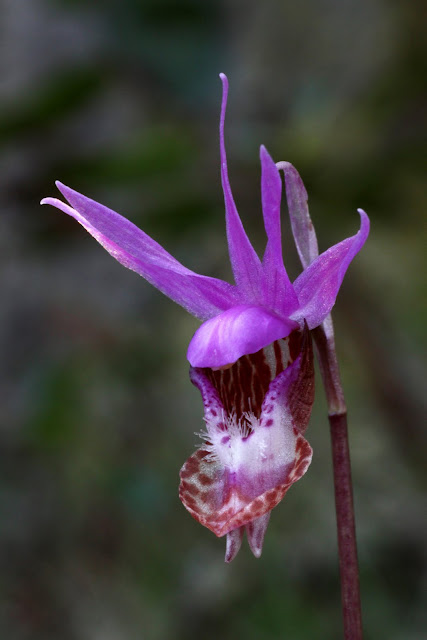 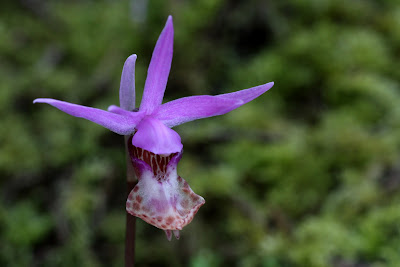 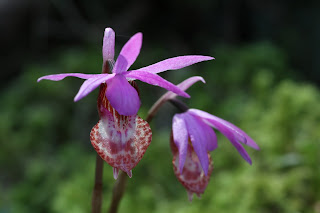 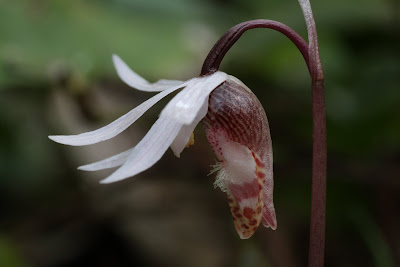 As for its habitat, it seems to prefer fairly bright locations under the trees or along the roadsides where there is plenty of moss, good drainage, and  relatively flat ground.  It generally does not grow in large clumps, but in scattered groups where its requirements are met, seldom more than a few flowers close enough to get them into a picture. 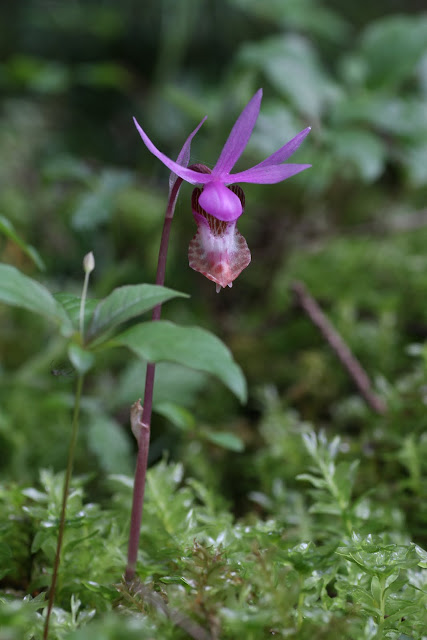 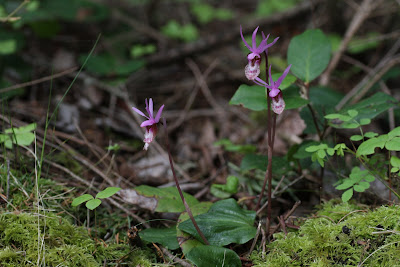 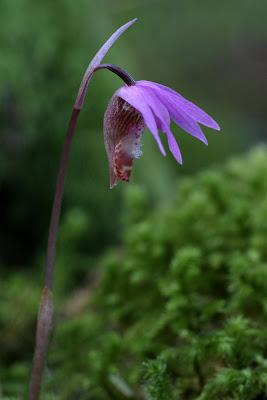