Platanthera transversa, the Flat-spurred Piperia is a smaller plant with small but unusual flowers.  It's name refers to the position rather than the shape of the spur, and as one writer says, it would better be called the "horizontal-spurred" Piperia.  The position of the spur is also the key to identifying this species which otherwise resembles the Long-spurred Piperia (Platanthera elongata) both in flower and plant size. 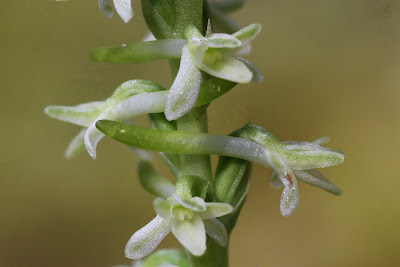 The plants grow to about 60 cm tall, though many of them are smaller, and the individual flowers are 1.5 cm to the tip of the spur.  The leaves, which lie close to the ground, are usually gone by flowering time, so that the flower spikes appear to belong to a  leafless plant.  The plant is native only to the Pacific Northwest and ranges from British Columbia to California. 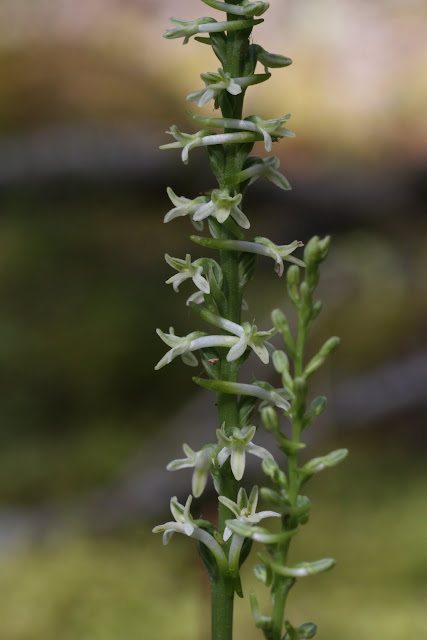 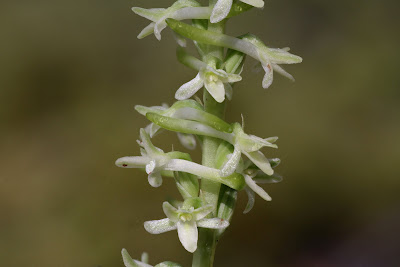 The plant grows in open areas in woodlands often in very mossy areas, sometimes hidden by the surrounding vegetation, and is often found alongside the Giant Rattlesnake Orchis, Goodyera oblongifolia, though that plant blooms later.  The flower spikes where we have seen them are usually scattered, not in clumps, and the plant from in our area from mid-July into August. 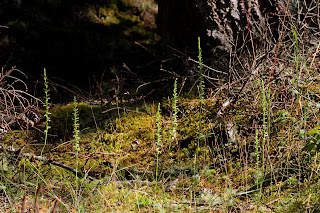 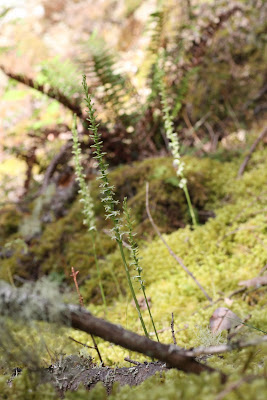 The flowers are white with a greenish stripe down the center of the segments and the spur is also tipped with green.  The nectar is visible in the spurs when the flowers are examined closely, and the flowers are said to have a clove-like scent at night, though we have seen them only in the day-time and could detect no scent.  They can number up to 100 per spike.
Posted by Ron at 12:43 PM No comments: 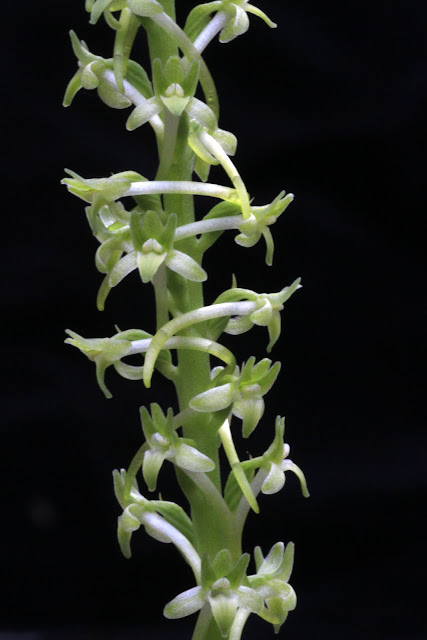 The individual flowers are less than .5 cm, but the spur is about 1.5 cm in length and though slightly curved, is much very visible, often making a kind of criss-cross pattern on the spike.  The flowers may number up to 75 or 80 per spike and are easily identified by the spur and by their green color.  They are supposed to be fragrant like the flowers of Platanthera elegans, but at night.

The plant has only a few leaves that have often disappeared by the time the plant flowers and that are almost unnoticeable when growing.  We've found it growing in very dry areas on a disturbed slope in and among brambles, sea grape and other low growing brush and found it both in shade and in full sun.  In shade the plants are quite a bit taller.

The plant is native to British Columbia, Washington, Oregon, California, Idaho and Montana, but is not common anywhere.  When we've found it, it has been fairly abundant in those locations, but we have only ever found it twice.  It also goes under the names Habenaria unalascensis ssp. elata and Piperia elongata. 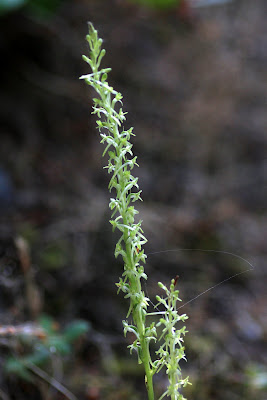 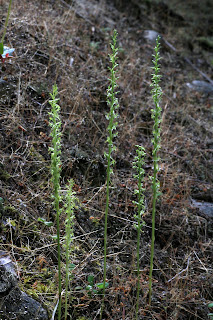 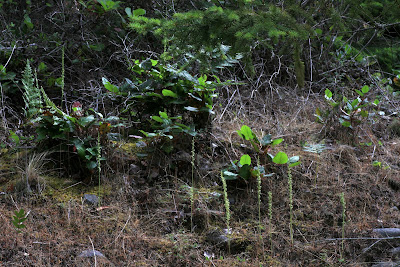 Platanthera elegans, also known as Habenaria elegans and as Piperia maritima, is an impressive species, standing up to and over 100 cm tall with numerous small white flowers, as many as 75-80 per spike. 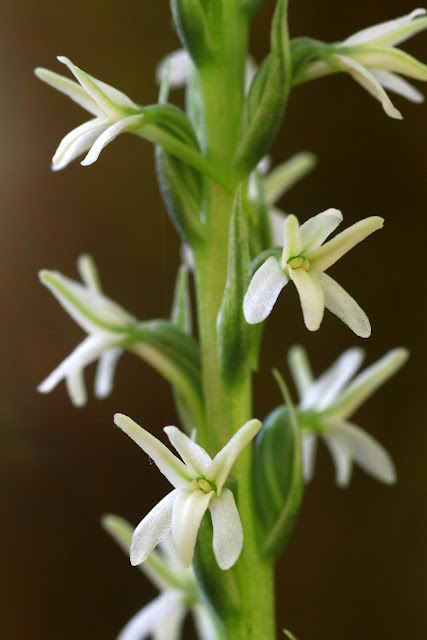 I well remember seeing this species for the first time in a shady area where its tall spikes stood out like glowing candles in the dim light. It is rightly named the "Elegant Piperia."

It is not common anywhere in its range which reaches from British Columbia to California and east into Idaho and Montana. It grows in sunny areas as well as shade but is a shorter and heavier plant in good light.

The individual flowers are a little less than 1 cm in size, though the spur is twice as long as the rest of the flower. It is said to be sweetly scented, but I have not been able to detect any scent when I've seen the species.

Like the other Platantheras once classified as Piperias this species has a few leaves close to the ground that have usually disappeared by the time the plant flowers.  The flower spikes, then, appear to be some sort of strange leafless plant, but in fact have already lost their leaves. 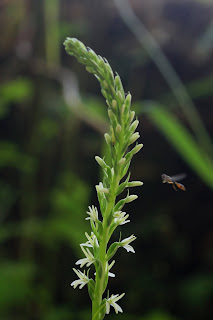 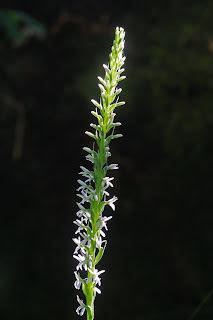 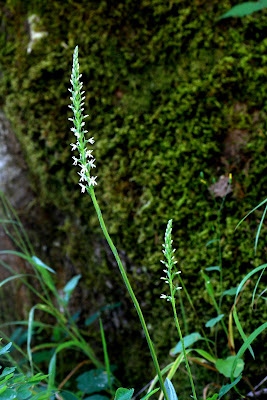