In the Pacific Northwest this is by far the most common species and the least attractive.  Its plain green flowers are only about a cm in size and though abundant, as many as 50 on a spike, would pass unnoticed in most cases, even though the plants are around 100 cm tall.

We have seen this species with stems as thick as a man's finger and as slender as a heavy wire.  It is identified by its narrow lip and inflated spur and ranges across the Pacific Northwest as far south as California and as far east as Montana. 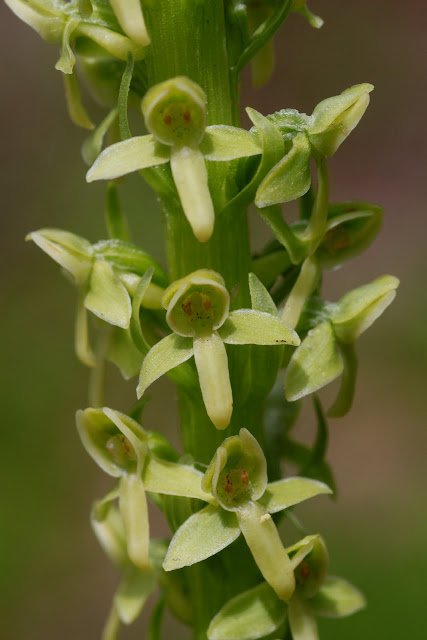 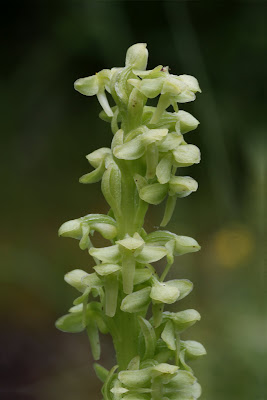 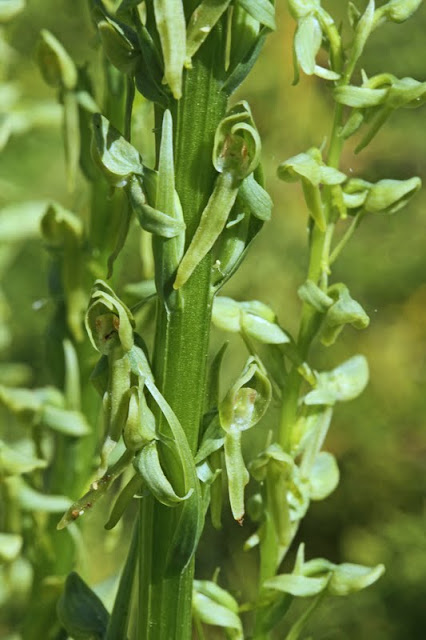 The Few-Flowered Rein Orchis is another of the green Platantheras, all of which are rather uninspiring as orchids go and often somewhat difficult to tell apart.  This one was rather easy to identify, but nothing to brag about, though a new species for us.

The species reaches the northern edge of its distribution in southern Washington State, but we saw it in northern California and southern Oregon, where is is abundant, growing in clumps of hundreds of stems in some places, and scattered stems elsewhere. 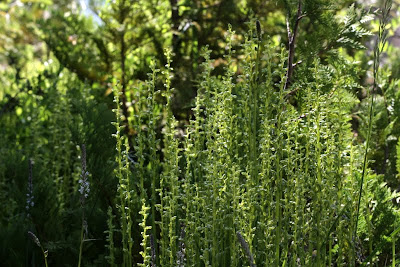 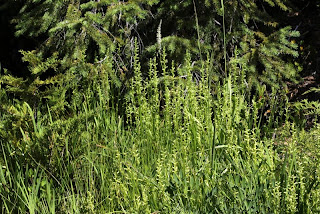 The plant with its flower spikes can be quite tall, growing over 75 cm, but is often shorter, especially in strong sunlight.  Like most of the plants in the genus it likes wet areas and is often found growing in serpentine seeps, as we found it growing on our recent trip. 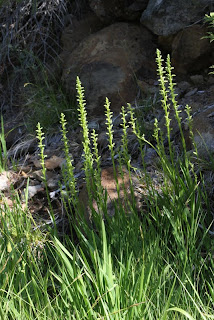 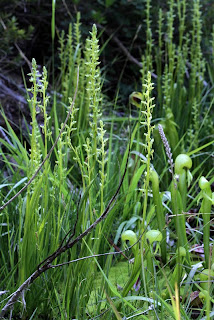 When found in serpentine areas it is often associated with the California Lady's Slipper (Cypripedium californicum) and the Cobra Lily (Darlingtonia californicum).  In fact, in nearly every location where we found Cobra Lilies, we also found this species.

The flowers are around 2 cm in size and the petals and dorsal sepal form a "hood" at the top of the flower, with the narrow lip hanging below and the lip-length spur behind the lip.  The rest of the flower is more or less curved back.  The flower count varied from few to as many as 45 flowers. 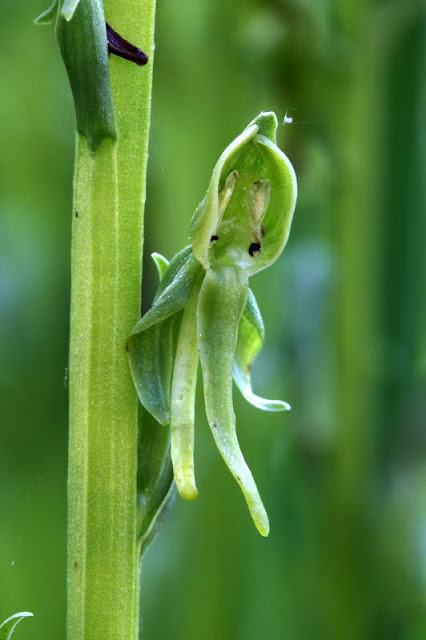 The name sparsiflora means "few-flowered" but it is difficult to see why the name was given since the flower count is no lower than the other green-flowered Platantheras.  But whatever the reason for the name it is relatively easy to identify this species from the shape of the flowers.
Posted by Ron at 6:30 AM 4 comments:

Platanthera orbiculata is a very striking species, very different from the other plants in the genus.  It ranges in a great arc from Washington, Idaho and Montana, through Canada and Alaska and down into the Appalachian Mountains as far south as North Carolina and Georgia.

Like P. obtusata, it is usually found in woodlands rather than in wet and marshy areas. and is easily recognizable not only by its location, but also by its two large pad-like leaves and its flowers which are whitish-green and look like a dragonfly in flight.

The plants are 60-57 cm tall and the individual flowers, usually 10-15 of them, approximately 5 cm in size, among the largest flowers in the genus.  It also blooms a bit later than the other Platantheras.  We've found it only when the other species were nearly finished flowering in early August. 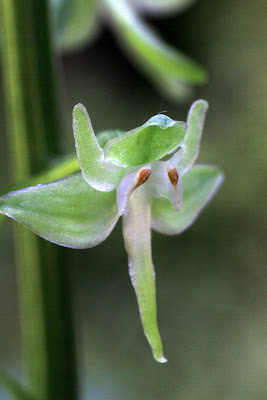 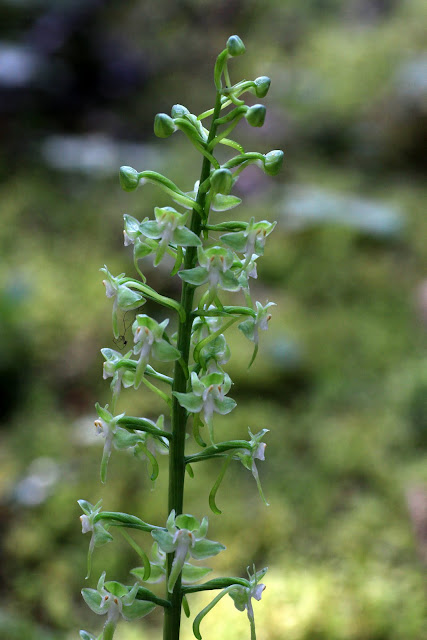 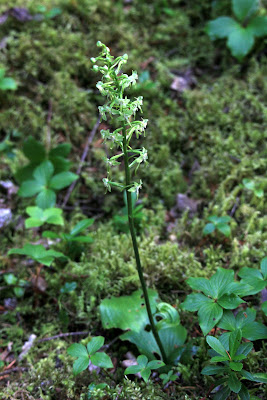 This is one of the easier Platantheras to identify since its 1 cm flowers are whitish in color and of a different shape from P. dilatata, aquilonis, huronensis, stricta and such species.  It is also much smaller in plant size, rarely more than 30 cm tall.

It can also be identified by the fact that it has only one leaf near the base of the plant and by the fact that it is often found in woodlands rather than open marshy areas.  There is a smaller, fewer-flowered subspecies, but that is confined to northern Alaska and Eurasia.

The species is found across Canada and in the United States only in Alaska, Washington, Idaho, Montana, Colorado, Massachusetts, and the upper Great Lakes region.  It increases in numbers the farther north one traces it, being rare in the southern parts of its range. 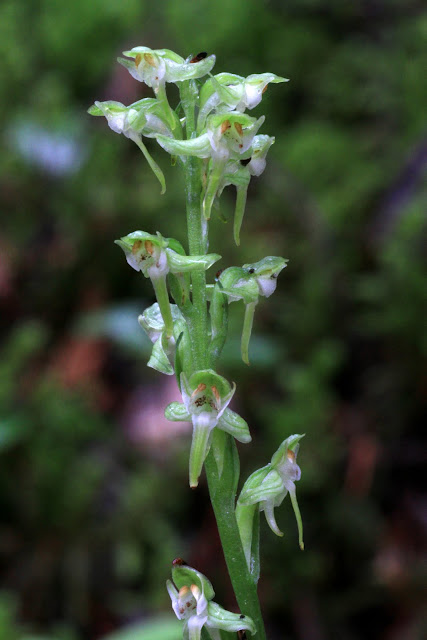 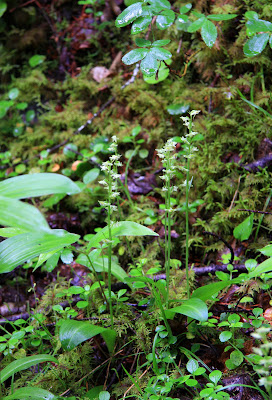 Always found in wet areas, as its name indicates, this is one of the less attractive species in the genus.  Its greenish flowers are a little larger than 1 cm and as many as 50-75 flowers may be closely crowded together on the stems.

This is one of the few species we have found growing at high altitudes, and because it is usually then growing in the open, the plants are quite short, about 10-15 cm, while otherwise they grow as tall as 100 cm.  It is also very abundant and can be found in large numbers.

This species, too, is found all across Alaska, Canada and the northern United States.  There are supposed to be some natural hybrids, but the green-flowered species themselves are so difficult to distinguish that we have made no effort to distinguish the hybrids. 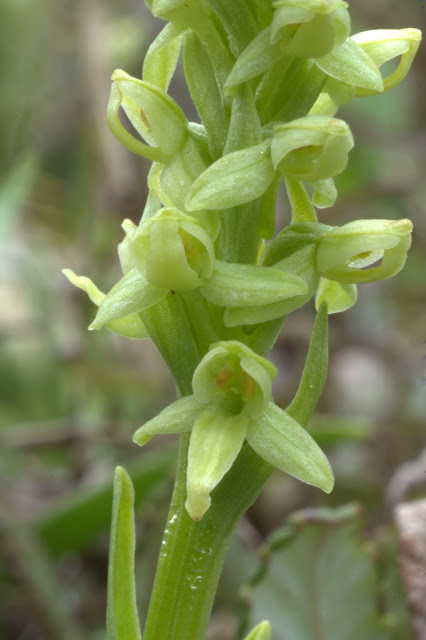 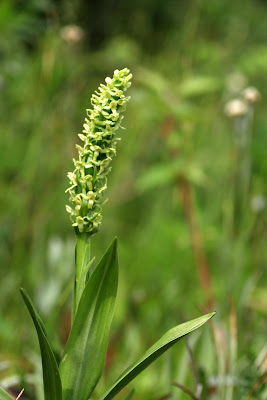 This, I believe, is a very small form of Platanthera huronensis, only a few inches tall, growing in an open area at about 5000 ft in the Canadian Rockies near Berg Lake. 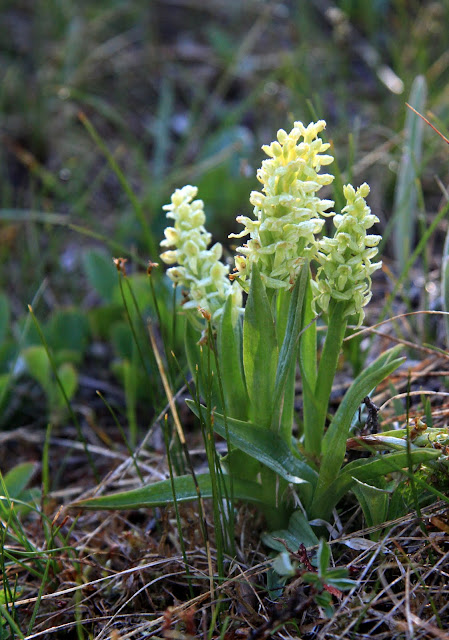