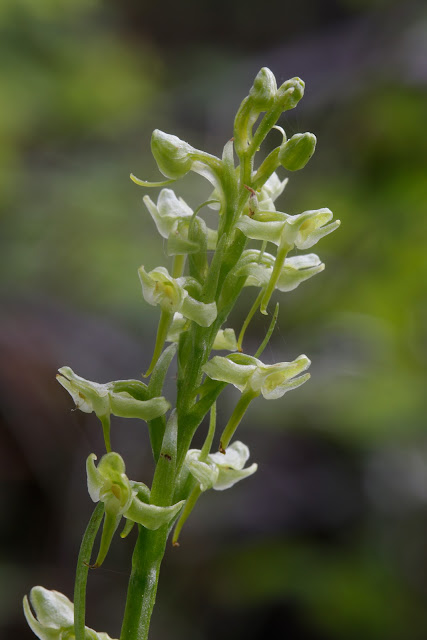 Platanthera obtusata, the Blunt-leaved Rein Orchis, is very common in the Canadian Rockies and further north and we've seen it often, so often that we do not usually stop to photograph it.  It was, however, one of only two orchids native to Washington that we had not seen in the state. 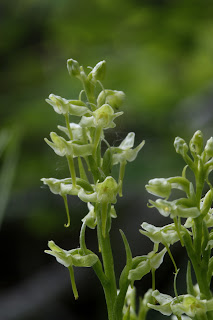 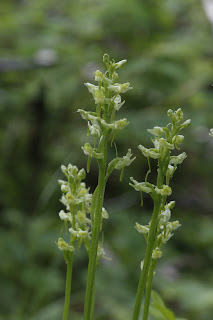 We'd been given several sets of GPS coordinates by a friend and finally found the species in the Okanogan Highlands in north-central Washington in two locations.  We had to do some scrambling and bushwacking to see it, but found it at peak of bloom and were delighted to add it to our list. 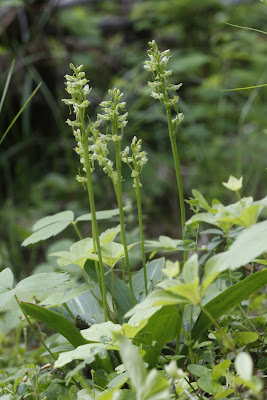 In both cases it was growing on the edge of a bog, about twenty plants at each location.  We did not stay long for photos since the mosquitoes were thick and biting, but got enough photos to record the find, beautiful in the photos but in fact rather small and uninspiring and easily missed.
Posted by Ron at 5:02 PM No comments: 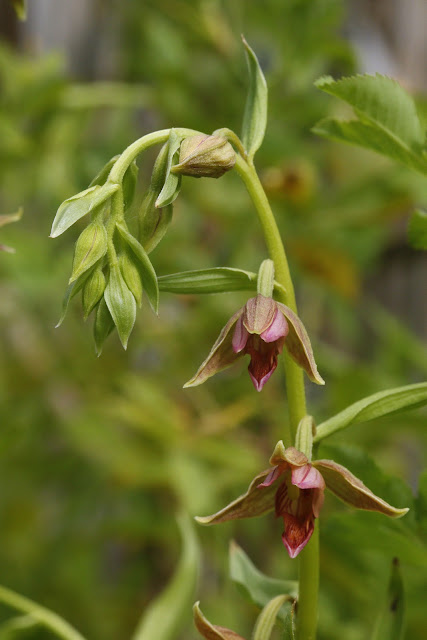 Having information from a friend who found the species there (he was along on the excursion) we visited Dry Falls State Park in central Washington to see Epipactis gigantea, the Stream Ochid.  Reputed to be rare in the state there were thousands of plants at two locations in the park, and though the flowers were just beginning to open we were able to get enough photos to prove that we had seen the species there. 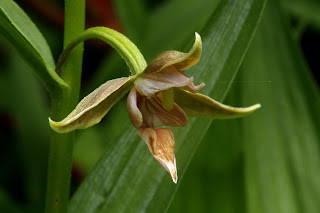 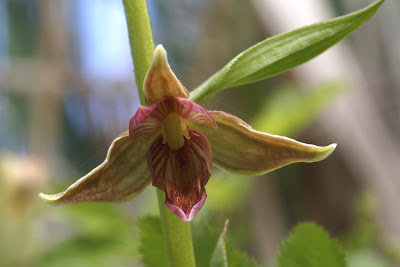 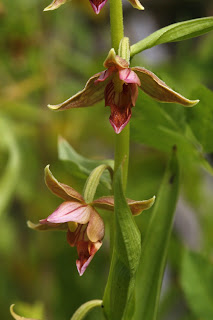 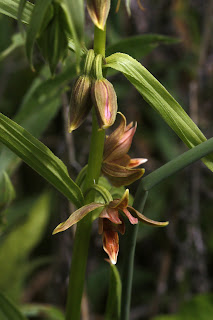 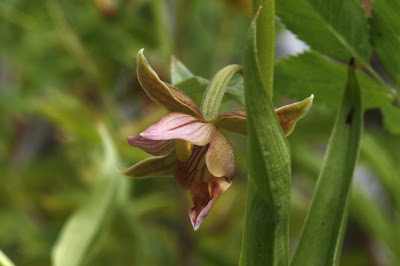 Epipactis gigantea is an attractive species, always growing near water and often on the very edge of streams and lakes.  That was the case here also.  Sometimes the flowers are rather dull-colored but often they are the opposite, as the photos demonstrate.  It is also a rather large plant as native orchids go, and it is surprising that with its size and the number of plants it had not been previously reported from this location.
Posted by Ron at 4:58 PM No comments:

2017 was a missed year for us as far as native orchids were concerned. I was in the hospital four times from March through August and did not really start feeling better until January of 2018.

Back on March 22 I went in to emergency at the local hospital with what I thought and the doctors first thought was appendicitis. An abdominal drain was put in to drain off the expected infection with an appendectomy scheduled several weeks later. The abdominal drain, however, produced no signs of infection but rather a kind of mucous and I was sent on to a specialist in Seattle who diagnosed the problem as mucinous neoplasms of the appendix, basically a tumor of the appendix that was producing a mucous-like substance that would in time strangle my organs and that could also have been cancerous. I had surgery on May 9 and had my appendix, part of my colon, gall bladder, omentum and peritoneum removed and was in the hospital recovering until May 24th (15 days). Thankfully, there were no signs of cancer.

While recovering from the surgery at home I ended up back in the hospital the end of June with blood clots in left leg and in my lungs. After spending several days in the hospital and being prescribed blood thinners I was sent home again and began the recovery from that problem.

Then the beginning of August I was back in the hospital, first in Bellingham and then after being transferred, in Seattle, this time for an obstructed bowel, the result of scar tissue. That stay lasted a week before the obstruction cleared and again I was sent home and have been home since gradually regaining my strength.
Posted by Ron at 8:04 AM 4 comments: