This plant is a natural hybrid between Platanthera dilatata var. albiflora and Platanthera stricta.  We have found it in several places where these two species grow together.

It looks more like P. dilatata than P. stricta, like a greenish-white version of the former species.  The plant and flower size are nearly the same also as for that species. 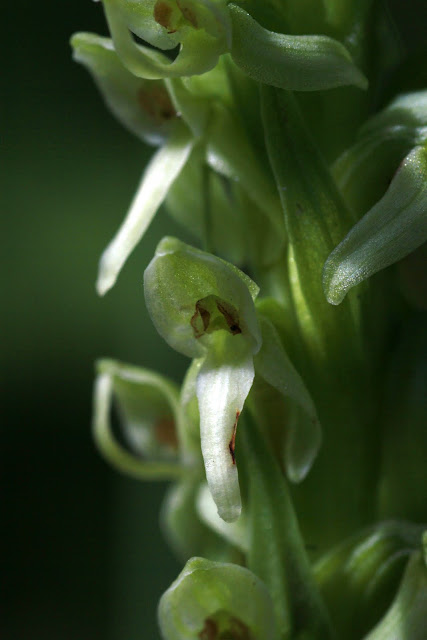 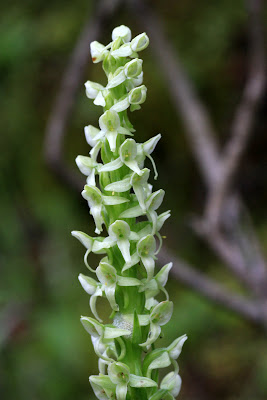 This is the easiest of the Platantheras to identify on account of its pure white flowers and its sweet scent. Its white flowers make it more visible than some of the other species, and its scent perfumes the air wherever it grows.  It is very common, but always worth seeing.

We have found it on almost every hiking trip and along the roadsides in every mountainous area of the Pacific Northwest, often by the thousands. Along the Yellowhead Highway in the mountains of British Columbia, for example, we have seen it blooming mile after mile in every marshy spot.

The plants can be quite short, around 20 cm, but are often much taller, around 100 cm. The 2 cm flowers are crowded along the length of the stems in large numbers, often over 100 flowers per plant. We have noticed that quite often the lip catches in the dorsal sepal so that the flower does not open completely.

There are several natural hybrids of this species and its varieties with P. stricta and sparsifolia.  These usually resemble P. dilatata, except for the flower color which is greenish, rather than pure white.  The only one of these natural hybrids that we've seen has been sufficiently different to warrant a separate post.

This species also ranges from Alaska across Canada and the northern United States as far south as Pennsylvania and Indiana, California and New Mexico. Varieties albiflora and leucostachys, however, are more limited in range, and can be found only in the western United States and Canada. 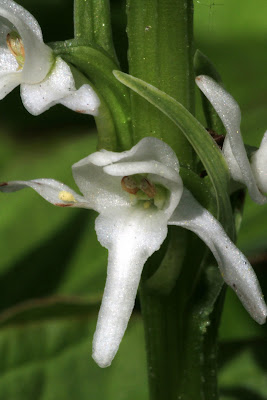 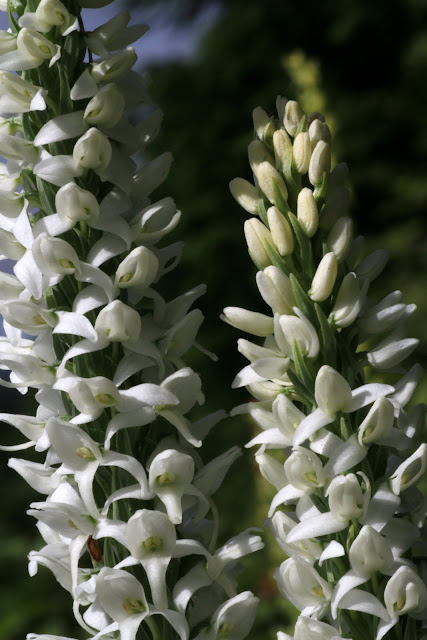 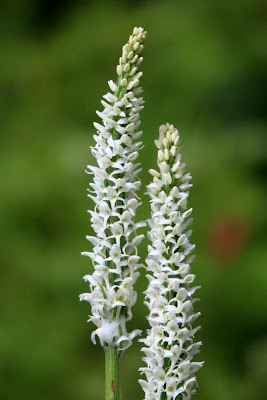 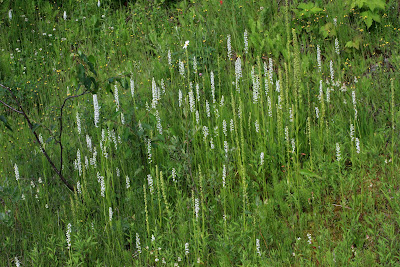 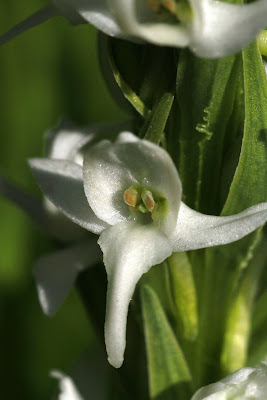 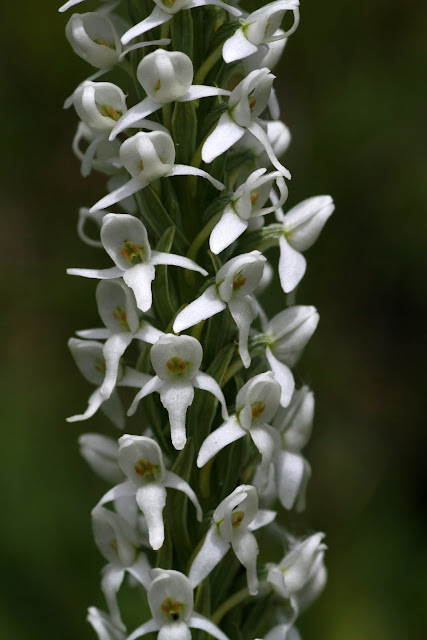 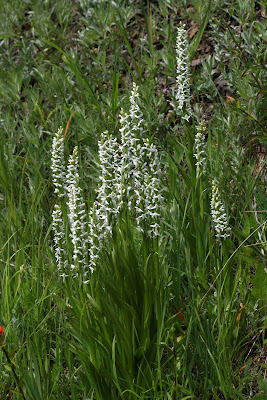 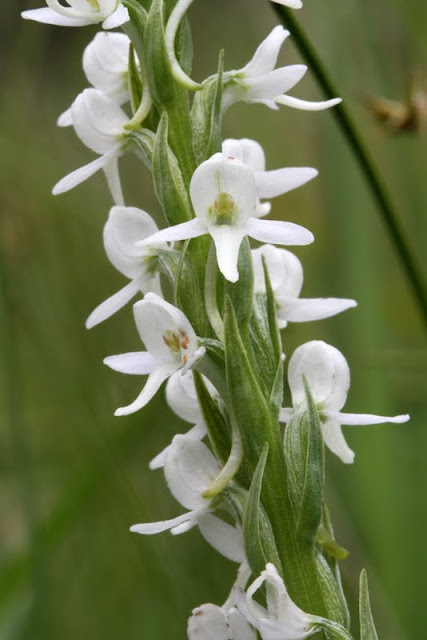 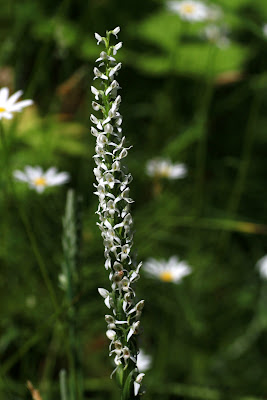 Platanthera chorisiana is one of the rarest orchids of the Northwest, and also one of the tiniest and hardest to find.  It grows in high altitude bogs and we had looked for it unsuccessfully in several reported locations in Washington and finally saw it for the first time on Vancouver Island. 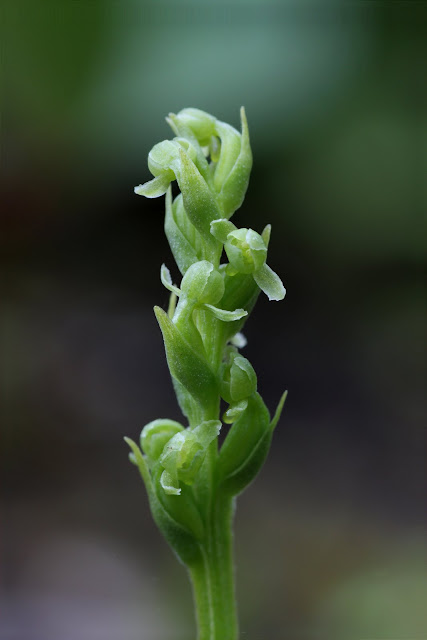 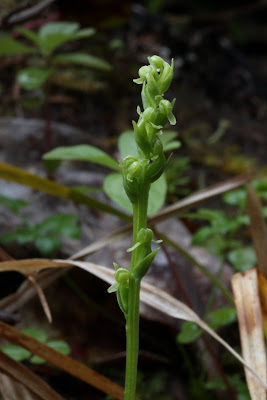 The plants we saw were all near 15 cm tall with tiny green 3 mm flowers that do not open widely and are self-pollinating.  The plants had 6-12 flowers per spike and tiny spurs that were shorter in length than the flowers, but with the nectar visible inside. 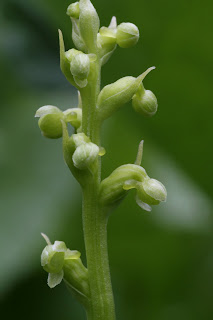 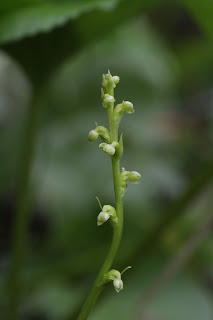 They were always in slightly shady and drier locations, often on the raised ground around the base of a tree and on the north side of the tree,  They were almost always found as single plants and often were completely hidden by the other vegetation. 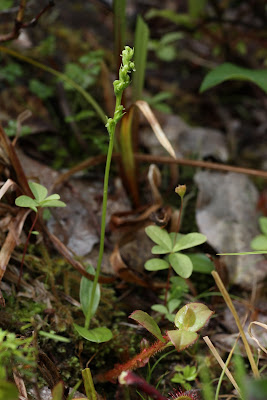 The plants generally had 2 or three leaves at the base of the plant and a slender flower spike, and seem always to be few in number.  The species ranges from Alaska through coastal British Columbia to Northern Washington and is also found in Asia.
Posted by Ron at 10:41 PM No comments:

This is one of the green-flowered Platantheras, which I find incredibly hard to distinguish, both because many of the species are similar, but also because they interbreed and are, therefore found in many intermediate forms.

Platanthera aquilonis is one of the easier species to distinguish both because its lip is yellowish in color and because of its club-shaped spur. It is also one of the larger-flowered and more attractive species.

The individual flowers are less than 1 cm, but the plant, usually around 45 cm, bears many flowers, up to 60 per spike, and puts on a fair show as a result.

All the Platantheras have been and by some still are classified as Habenarias, and this species was once known not only as a Habenaria, but as H. hyperborea, now considered to be confined to Greenland.

We have not found this species as often as we have the other Platantheras, but when we've found it, it has been locally abundant, and always growing, as is the case with many in the genus, in marshy areas.

The plant ranges all across Canada and Alaska and across the northern United States as well and down into California and New Mexico. 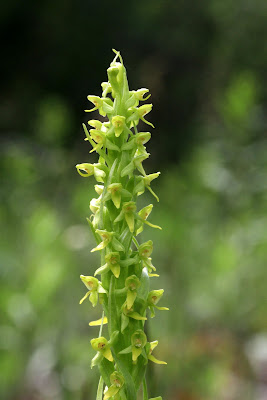 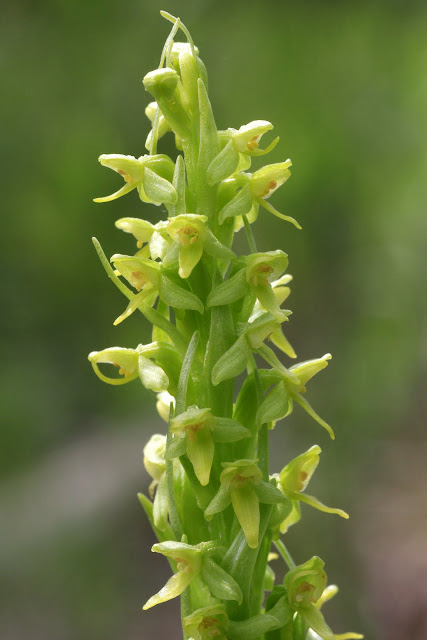