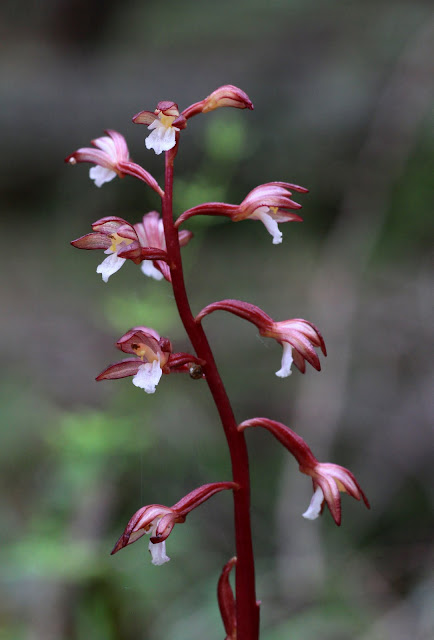 Corallorhiza maculata var. ozettensis
Not much hiking this time of the year and certainly no native orchids to look for, but at least we can plan for next summer and spring and have been doing so.  At this point our goals for 2012 are:

1) To see the five native orchids of Washington State that we have not yet seen.  They are Corallorhiza striata var. vreelandii, Cypripedium parviflorum var. makasin, Liparis loeselii, Platanthera sparsiflora and  Spiranthes diluvalis.  We do not expect to see all these in Washington State, since some of them are rare to non-existent in the state.  One site gets mowed every year and another is on private property and the owner will not allow anyone on the property.  If anyone knows of locations for these in the Northwest, please let me know.

2) To get better habitat pictures of many of the orchids we've already seen.  I worked quite hard on this last summer, but still am not satisfied with many of the pictures.  This will involve revisiting many locations, but we are always eager to do that anyway.

As to plans we have the following places on our agenda already in addition to many other locations:

1) The Siskiyous in Oregon.  We've been meaning to go for several years but have not yet made it there.  We want not only to see the orchids of the area but other wildflowers as well, and the scenery including the Oregon coast.  We may even get across the California border if we have sufficient time.

2) Some new orchid sites in the Canadian Rockies.  We've backpacked in Mount Robson Provincial Park two of the last three years and day-hiked there as well, but we now have information on other native orchid sites in Jasper, Banff, Kootenay and elsewhere.  Since we have a daughter, son-in-law and granddaughter in Edmonton, we usually get up that way in the summer.

These are musts, but there are many other locations in Washington, Idaho, Oregon and British Columbia that we have on our list of places to see.
Posted by Ron at 3:21 PM 8 comments: