Calypso bulbosa, the Fairy-slipper orchid, is without doubt one of our most beautiful natives and is found from Alaska all the way across Canada and in the northernmost United States, including the Pacific Northwest, the upper Great Lakes area and northern New England.

The plant is almost always found in shaded areas, often along trails and openings in the woodlands where its bright pink color stands out and is easily seen, even though the plant and flower are very small, the plant usually about 20 cm or less and the flowers about 3 cm.

There are some variations, but the plant is usually single flowered and usually has a single leaf that persists after the flower is finished. It is relatively common in our area and we have almost always found it when hiking in the spring in the North Cascades.

Its common name is Hider-of-the-North, a very appropriate name because of its small size and also because it is usually found as a single plant and flower, though when it is happy it will often form large stands, but these are vulnerable to changes in the habitat.

There are actually four varieties of this orchid, one variety found only in Japan and another found across northern Eurasia. The other two are found in North America, varieties americana and occidentalis, both of them shown below and distinguished by the color of the "beard."

Calypso bulbosa var. americana, the Eastern Fairy Slipper, is the more common variety and the only variety found east of the Rocky Mountains. It is easily distinguished by its yellow beard and white lip and is the more brightly colored of the two North American varieties. 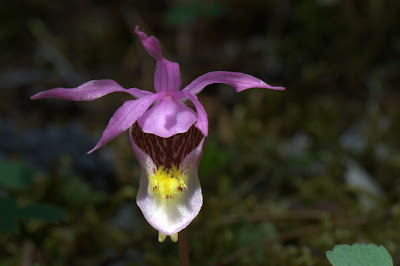 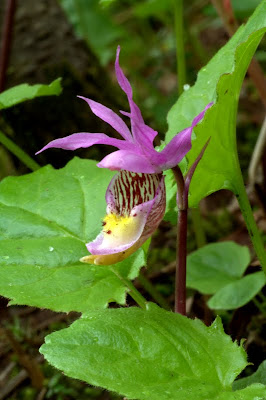 Calypso bulbosa var. occidentalis, the Western Fairy Slipper, is found only in the Cascade mountain range and west of the Rockies in Alaska, British Columbia, Washington, Oregon, California, Idaho and Montana. It has a white beard and a lip that is heavily spotted with brownish-purple.  It is, in our area, by far the more common variety and the one we have seen most often. 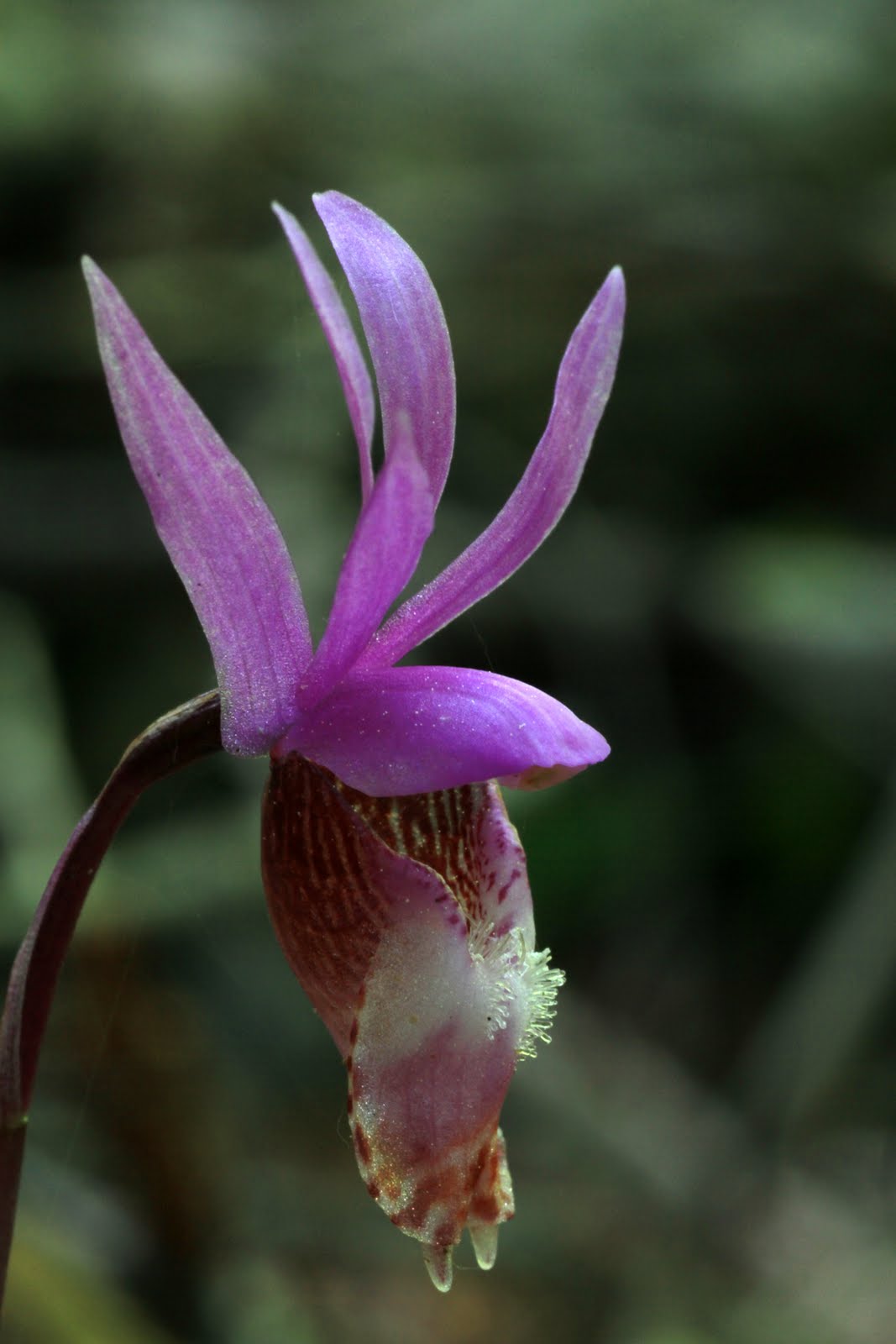 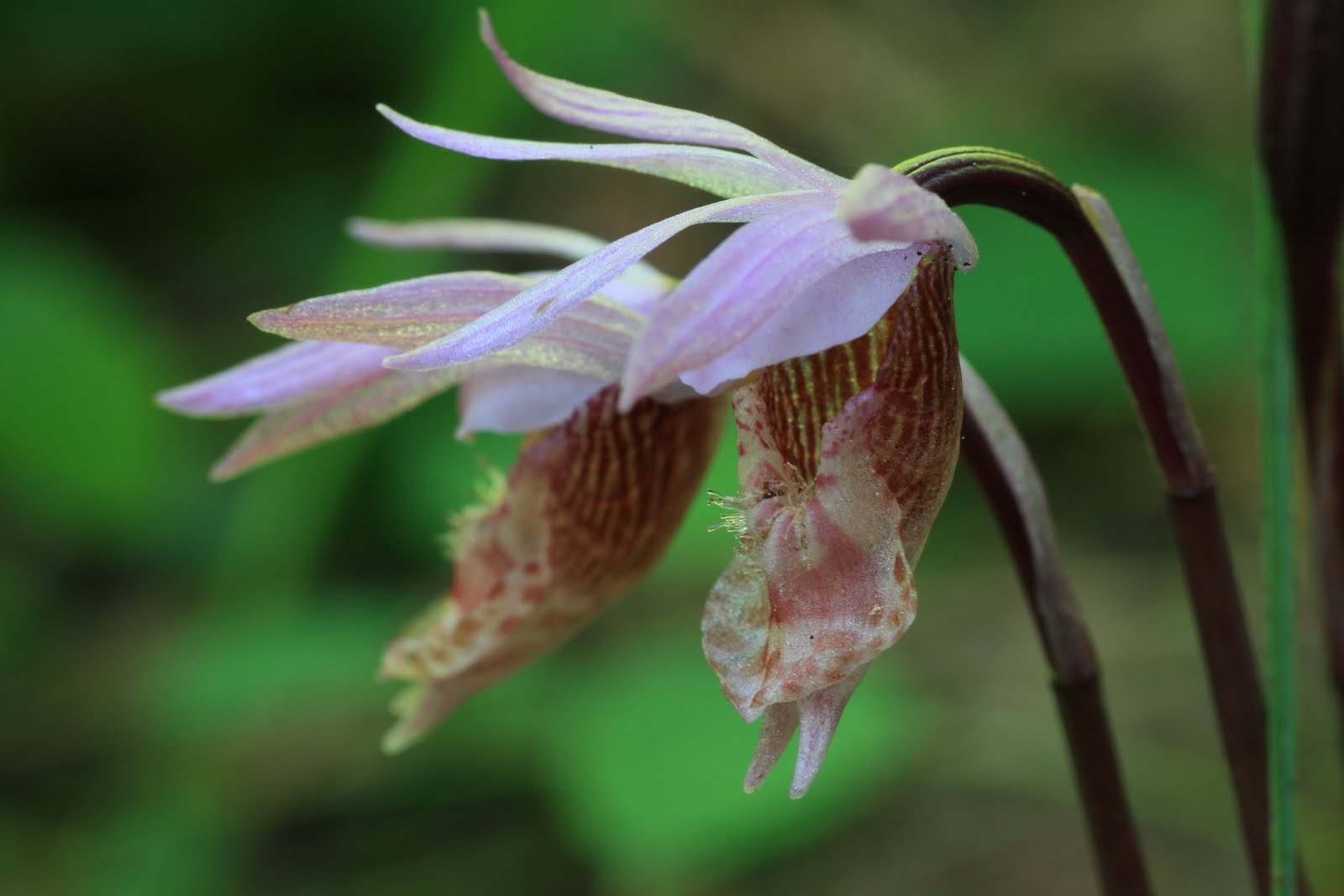 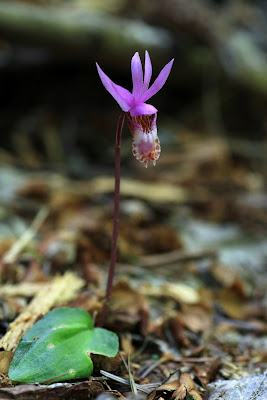 Fantastic collection of Calypso photos, Ron! Very clear description of the two C. bulbosa varieties found in the U.S. I've always thought that the yellow-lipped form must just be some type of variation that I've not seen. Now I know.

Interesting, isn't it, how plants vary geographically? There is also a third variety that is found in Japan!

Spotted two of these in the Mission Tribal Wilderness of Montana. The low foothill canyons are interior temperate rainforest.

I thought yours would be the Eastern Fairy Slipper with the yellow on the lip but it isn't. It's the Western variety. Nice find.

I want to know what the role of it is in the Taiga! Otherwise, I liked it.

Thanks for the comments.